Struck Down but not Destroyed 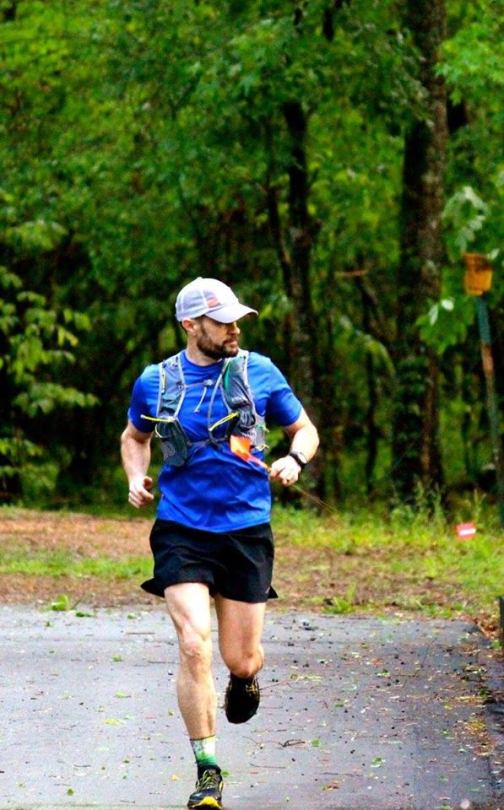 I never considered myself a runner.  I wrestled in high school and running was something we did for conditioning.  Later in life, after being married and having three kids, I got back into martial arts and fell in love with Jiu-Jitsu.  I did well at tournaments and enjoyed the competition and comradery.  I would run on off days to keep my cardio up and my weight down for competition.  While training with my instructor in 2009, I tried to muscle through a technique that bent my knee sideways and I felt/heard a POP in my right knee.  It hurt.  I saw white for a second.  I sat aside for a bit and the pain subsided.  So, I jumped back in and rolled on the mats for another hour and a half.  I was in denial.  For the next few weeks I would still train and run but something wasn’t right.  My friend was a nurse practitioner and I went in to see her. She ordered an mri.  The next day she called me and said, “STOP!”  I asked her, “What are you talking about??”  She said, “Stop everything.  Stop running.  Stop jiu-jitsu!  You have a torn ACL!”

Great…….not good.  So, I sought out a reputable knee doctor and scheduled ACL reconstruction.  I had the surgery in December of 2009.  I wanted a goal to rehab the knee.  So, never having run any kind of race in my life, I put it out there that I wanted to run a marathon within a year!  So, I busted my butt in physical therapy and ran as my knee allowed me to do so.  In December of 2010, I ran my first race, a marathon, in 3 hours and 43 minutes wearing vibram five finger shoes!  I realized that I really enjoyed this running stuff!  So, I went back and raced the other distances (5k, 10k, half marathon).  I loved it and was doing pretty well!  I then started running other marathons and just wanted more.  MORE MILES!
So, I started training for my first ultramarathon.  Instead of setting my sights on a 50k, I went ahead and signed up for a 100 miler.  In December of 2013, I ran my first ultramarathon at the Cajun Coyote 100 miler.  It was tough!  It’s a rooty course and I turned my ankle pretty bad around mile 40 and then around mile 60.  It was swollen and funky, but I had a race to finish.  I finished in 5th place with a time of 22 hours and 40 minutes!  I loved it!  Hurt so good!  Since then, I’ve gone back and done some 50Ks, 50 milers, other 100 mile races, Boston, and even a 126.2 miler.

Then, in 2015, I destroyed that same knee AGAIN jumping on a stupid trampoline.  This time I not only tore the repaired ACL, but I really did a number on the cartilage and meniscus too.  I had surgery and went through rehab…again.  Then I ended up having another surgery fo finish something up.  I was afraid my running career would be over, but I kept plugging away and finally got my legs back.  Since then, I’ve done three more 100s (placing 8th, 2nd, and winning the Prairie Spirit 100 with a 16:25:31 PR), run the Grand Canyon rim-to-rim-to-rim, and a bunch of marathons, 50ks and 50 milers.  In 2018 I completed the Tahoe 200 in September followed by Arkansas Traveller 100 four weeks later for my Western States ticket.  In 2019, I completed the Western States 100 and received my silver buckle.  I also placed 3rd at the Pumpkin Holler Hunnerd and the Dreadmill Challenge.

2020 will be a big year!  I'll be running the Triple Crown of 200s and have lots of races lined up as training to accomplish this huge task.  I'm excited, motivated, and a little terrified!  It'll be a great adventure!  Lord willing, I’ve got plenty of miles left in me and many adventures left to run!