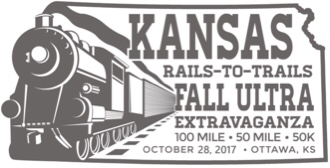 I ran the Arkansas Traveler 100 earlier this month and recovered very quickly.  I decided I needed another race before the Route 66 marathon and the Great Mississippi River (130 miles) a week after that.  🙂   I decided on the Kansas Rails-to-trails fall extravaganza 100 miler.  It would be an out and back run through flatness!  When I signed up it was supposed to be cool.  Well, by the time the race weekend came around, it was FREEZING, not just cool.  When I realized that I was going to start with below freezing weather and end with below freezing weather, I wasn’t sure how I was going to dress.  Also, this was my first 100 mile race with no crew or pacer.  So, planning out my drop bags with nutrition, headlamps, changes of clothes, shoes, etc. would be VERY important.  I did my best to plan it, pack up, and leave straight from work on Friday for the 3 hour drive.

I got there a little late so dinner was winding down.  I got my packet, dropped off my drop bags and visited with Wyatt H. for a bit.  He lives and puts races on in Owasso, where I work.  We were Facebook friends but had not met in person.  After a few, I headed out to get some non-carb grub, checked into my hotel and rested up.  It was going to be an early, long, and cold Saturday!  I didn’t sleep particularly well on Friday night.  My room was too hot even with the freezing temperatures outside and the heater turned off in the room.  I even put the fan on the AC unit blowing a bit to cool it off.  It didn’t help much. 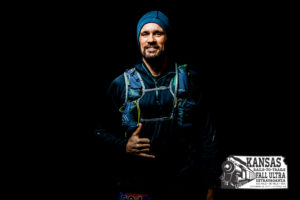 I got up super early and went through my morning ritual.  Coffee, food, shower, check racing vest, pin number, check vest again, etc.  I was staying just a little over a mile from the start so got to the start about 20 minutes before the pre-race meeting.  I took my pre-race pic with Mile 90 Photography (mile90.com) and chatted with a few of the other runners.  Shortly after directions from the RD, we were summoned to the starting line and the race began!  I fell in with the front pack and we were cruising along somewhere around a 8:30-9:30 pace.  It felt easy and it warmed me up so I just hung out there.  Little by little some of the runners would settle into a slower pace and drop off.  At one point, I sipped on my hydration hose and nothing came out.  I fiddled with it and panicked a little thinking it was broken.  What would I do?  What could I use?  I squeezed it and felt a slight crunch.  I squeezed it again and sucked on the tube and drank a Tailwind Slush for the first part of the sip!  It was so cold, it froze!  This Louisiana boy is not accustomed to that!!  It happened a few other times until it was warm enough to stay a liquid.  Craziness!  Anyway, at this point, a few of us were doing our thing and leap-frogging between first, second, and third places.  By mile 11, I was alone in first place and just settled in.  At some point along the way, the eventual winner caught me and we leap frogged a bit until he opened up a pretty good gap between us.  I just ran my race on feel and tried to enjoy myself as much as possible.  I tried not to pressure myself.  I had just come off of a good race at AT100 and this was just some extra fun.  I ran a PR for the first 50 miles at 7hrs 30 min and some change.  That felt pretty good.  I would occasionally feel a little something here in a foot or there in a quad, but for the most part I felt strong.  I was running in my Altra Escalante until I opted to change into something thicker.  Although most of the  crushed limestone was fine packed, there were some larger rocks that would poke and hurt my feet occasionally.  I already had well over 700 road miles on those things anyway.  Great shoe. 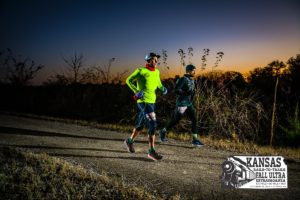 As the miles wore on, my pace slowed.  I would allow myself short walk breaks here and there.  Though I felt like I was running an 8:30, I’d look down and my pace was more like 10-11:30.  It happens.  My stomach was doing well and I was loving the chicken broth and coke at the aid stations.  I’d have a nice turbo charge for a few miles out of each aid station.  Speaking of, these aid stations were great.  They were very attentive, helpful, and quick.  I actually sat for a minute at a few when I was going through my drop bags for things.  I didn’t let myself get too comfy though.  In fact, I remember saying a few times, “You guys are awesome, but I gotta get up and go.  Getting too comfy in here!”  then I’d bolt!

The sun went down and with it any semblance of warmth.  I had heard that first place had about a 35 minute lead.  I figured, I had a chance to catch him if he slowed down a lot.  We’d see what the night would bring.  I was content with my current pace.  If I kept it up, I’d have a huge PR and possibly hold on to 2nd place.  Then it happened – shortly after mile 90, I saw headlamps behind me.  I thought it was a strong runner named Matthew that I met from Oklahoma City.  I dug deep and was much more intentionally with my pace and short rests.  This course allows you to see a long way back in sections so it was hard to tell how far back the lights were.   I dimmed my light as much as possible so they wouldn’t see me as well and just grinded out the miles.  After the last aid station, I had 7 miles to go.  I was determined to run the whole thing.  I pretty much did.  I kept looking back for fear of being caught.   I was tired, but I kept running hard.  I was ready to be done.  Finally, I entered Ottawa and was in the home stretch.  No one behind me.  I just kept running.  The turnoff to the finish actually surprised me.  I was there!  I ran all the way through the finish line!  It felt so good!  I finished with a time of 17:26:56, 2nd place, and a PR!  As I walked into the Celebration Hall, I saw the first place finisher sitting there.  I asked, “Man, how long have you been sitting there?” He said, “Only 5 minutes!  You almost caught me!”  We chatted a bit.  He told me that with 3.5 miles left, he was moving slow and looked back and saw my headlamp.  His pacer said, “Come on, let’s go!”  And they ran from me.  I hadn’t even seen them!  I can’t help but think I may have ran even harder if I knew he was that close.  I looked back and my last 4 miles were run at 9:54, 9:33, 8:48, and 8:34.  Like AT100 three weeks before, it was another strong finish.  It feels good to be able to turn it on at the end of a long race and still have something left in the tank to draw from.  I’ll keep fine tuning and working to get better and stronger! 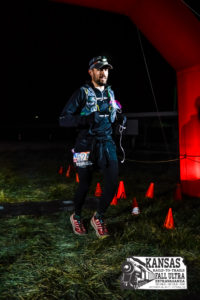 The Kansas Rails-to-trails was a great race and well supported.  I do believe I will be running with these guys again.

For now, I rest.  There are more races to come! 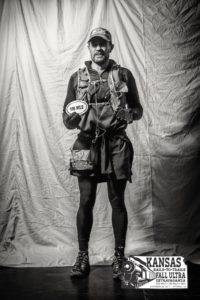 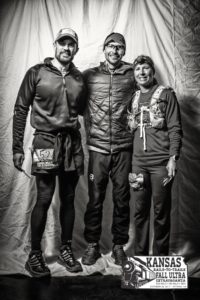