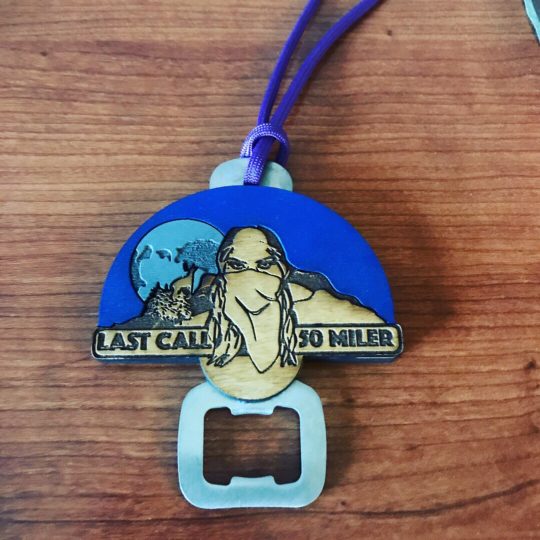 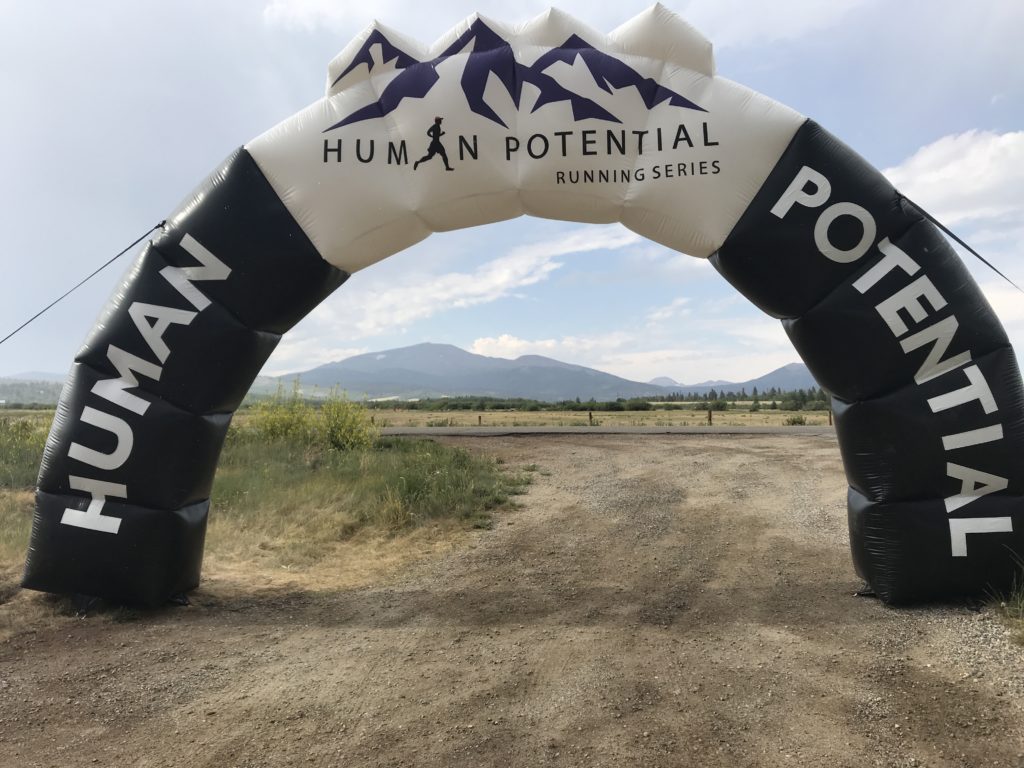 I was pretty excited to head to Fairplay, CO to play in the mountains for the Last Call 50 Mile race.  I had run the Midnight Madness 50 miler at home in Tulsa the week before and was using both of these as training for Tahoe.  Where the MM50 gave me some flat fast running, the LC50 would give me altitude and elevation training. With over 9,000 feet of gain on legs that still were not 100%, I knew it would be a challenge!  This race also started Saturday night at midnight….but…..on trails…..in the mountains….starting at over 10,000 feet of elevation. This was the first year of the LC50. It was an addition to the Silverheels 100 that would start 16 hours before we did.  The 100 started at 4am on Saturday morning and go until 3PM on Sunday. We would join them on the trails and provide some added energy and encouragement. 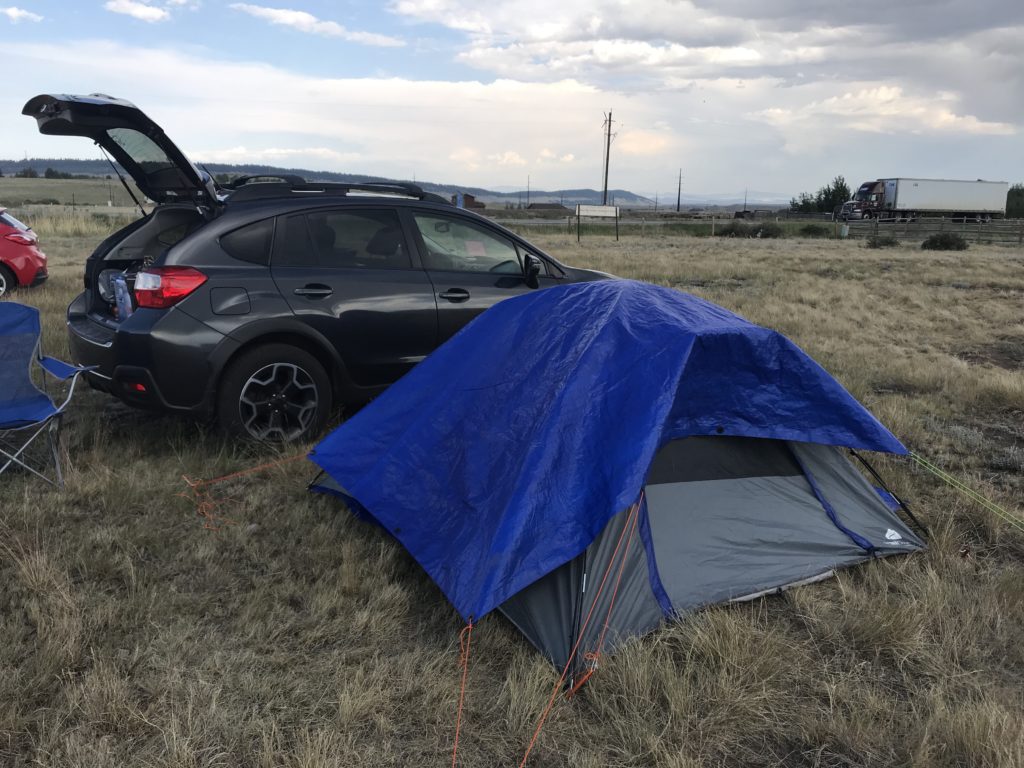 I drove the almost 11 hours to Fairplay on the Friday and set up my tent in the designated area near the Start/finish at the SouthPark Rec center.  The drive went well and I really enjoyed looking all around me and seeing MOUNTAINS! I sat in on the 100 miler race meeting just to learn about the course.  THe RD, John Lecroix, whom I had watched some of his videos on Facebook talking about the race and trails was a no-nonsense kind of guy. He seemed thorough and on top of things.  I crashed in my tent after the meeting and managed to get a full night’s sleep. Saturday, for me would consist of hydrating, napping, and eating. I also did some exploring of the area and driving down the road to the Continental Divide.  I knew I needed to rest because it would be a long night. 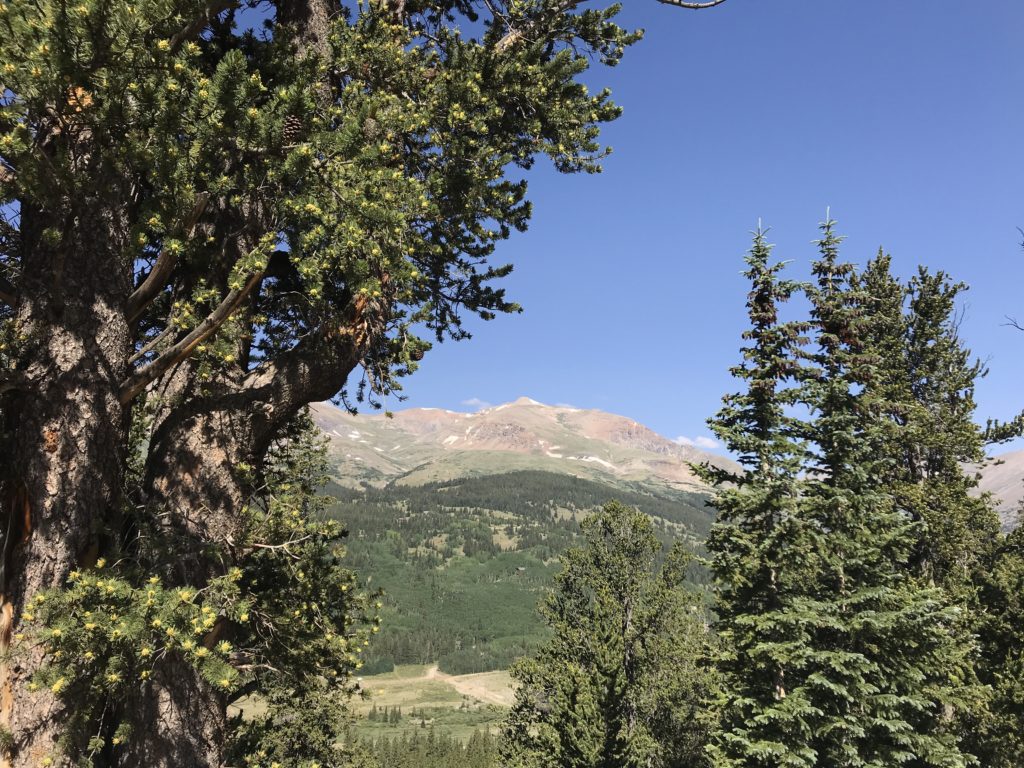 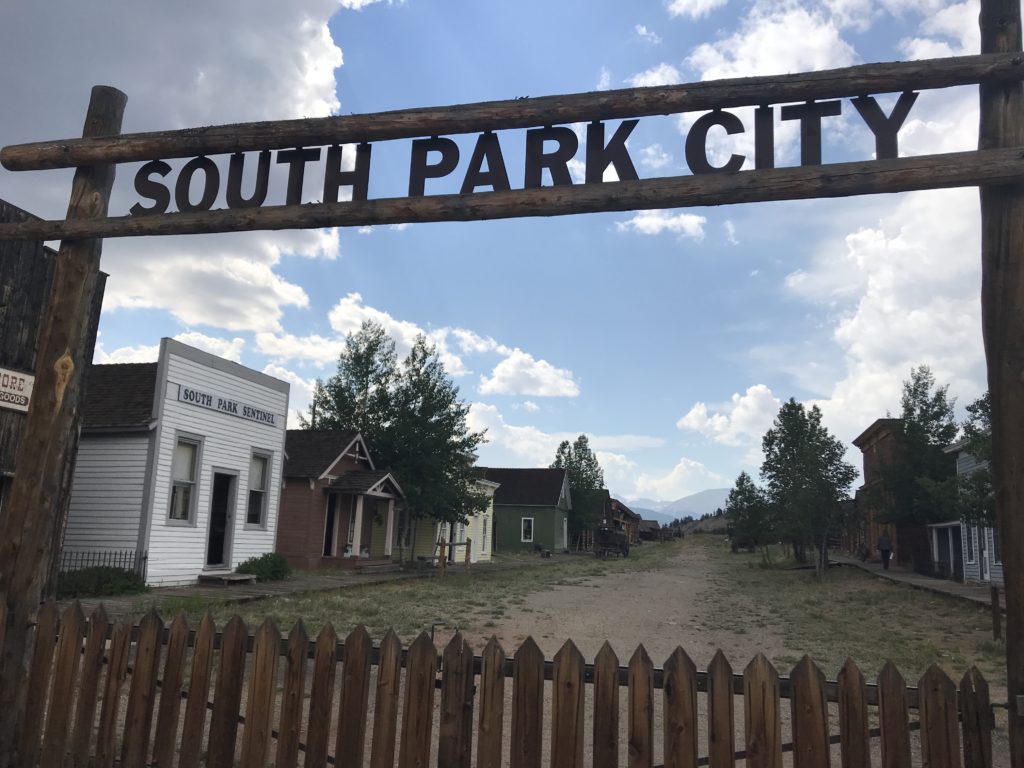 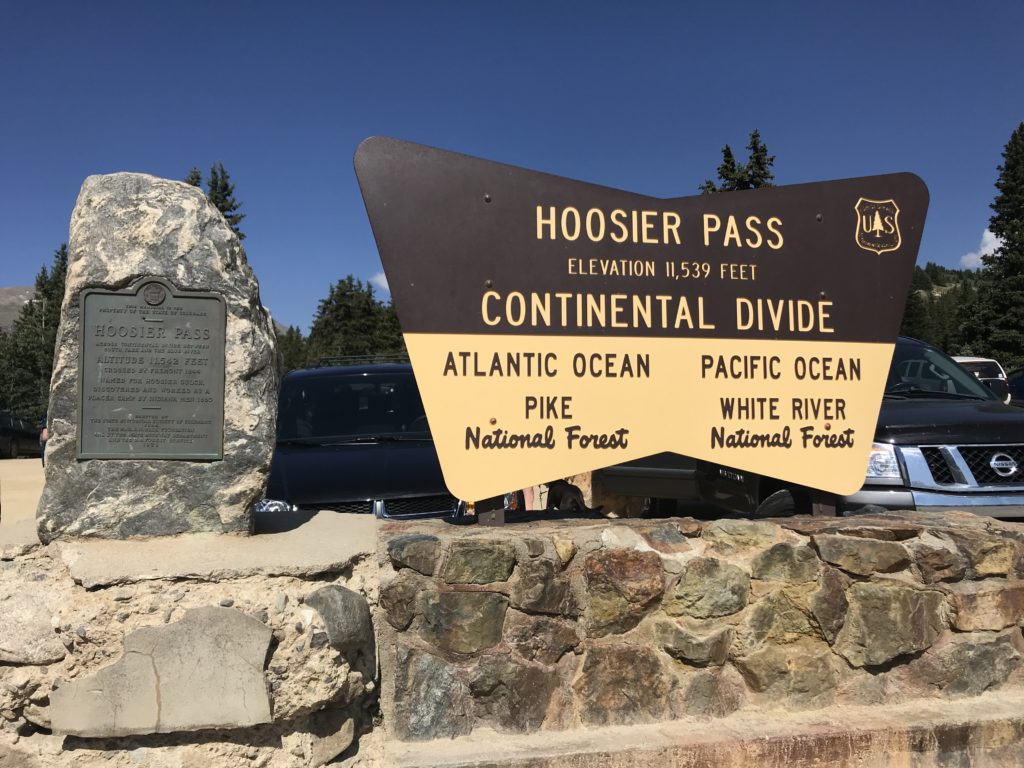 As midnight approached, I got dressed and attended the pre-race meeting.  I sat down on one of the Rec center couch to relax for a minute. Just then, an older gentleman sat next to me and commented on how much the cushions sank.  I replied, “Yeah, it’s like you sit down and you keep on sitting further down.” As I was saying it, I looked over at him and realized I was talking to Marshall Ulrich!!  I tried not to go all fanboy on him.  It was funny, because I’m almost done reading his book “Running on Empty” for the second time. I told him that I appreciated all of his legendary exploits in the world of Ultra Running.  He was using this run as part of his training for this years BadWater 135, which he’s completed a number of times, sometimes unsupported . Sometimes, more than once. Oh, and I believe he is 67 years old and still at it! Anyway, that was a really cool thing to happen before the race. 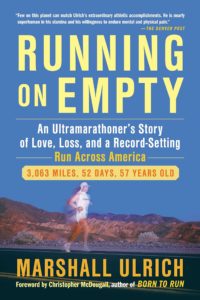 So, I was excited and ready to get started.  We lined up. The RD said something like, “Go, don’t mess up, and have fun,” and we were off!  This was my first time running at this elevation and my legs and lungs definitely felt like it.  We ran on about ¼ mile on paved roads, then dirt roads until the first aid station at 3.5 miles.  It was about 48 degrees and I had dressed in layers. I stopped at that aid station real quick and took off a layer as I was already starting to sweat.  From the aid station, we immediately started on single track trail headed up in elevation. At this point, I was in the top 5, but knew I would need to slow down a bit.  I backed off and slowly started up the mountain. This was going to be a long night and day. I kept plugging away in the dark, following my headlamp. I was still sluggish, but moving steadily forward.  I started to just power hike the uphills and run the downhills and flats. I was looking forward to some daylight so I could enjoy the view. 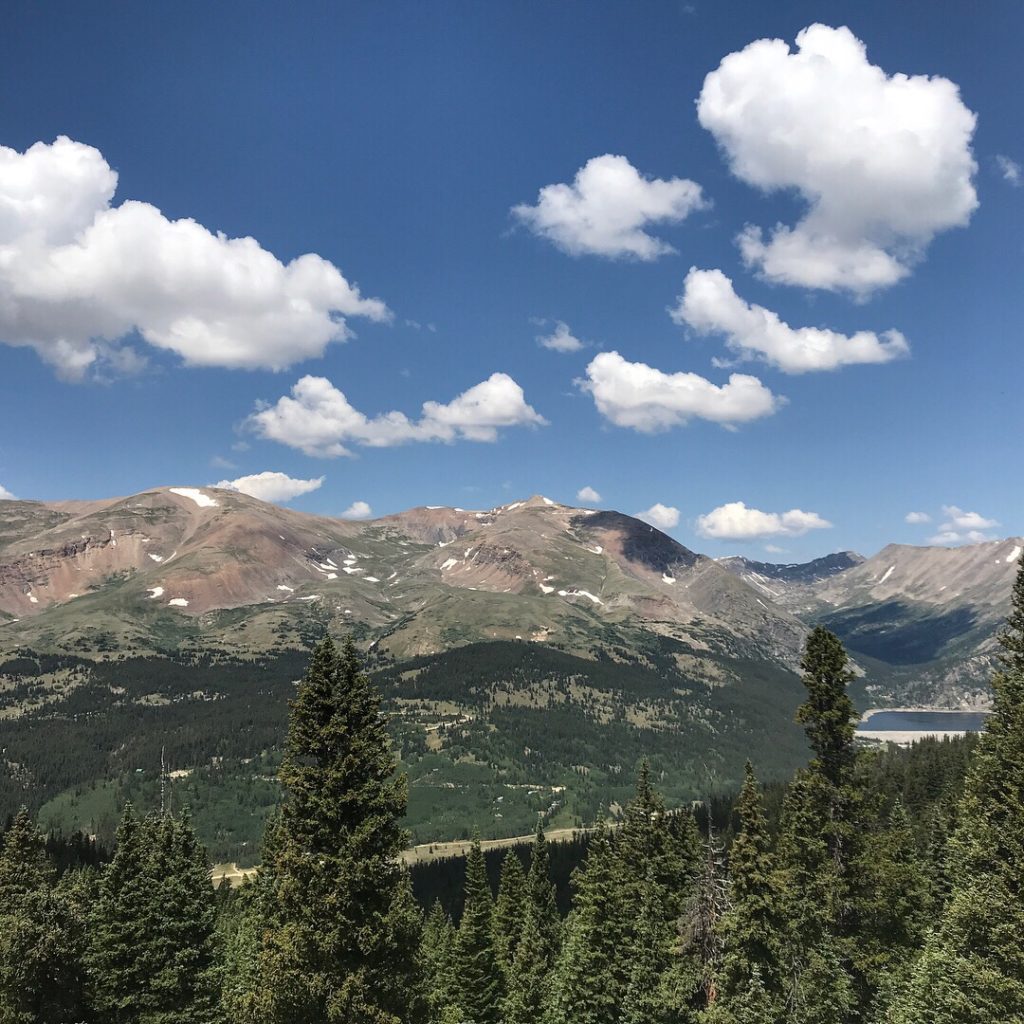 At about 4:45 things started to light up and give me a little boost of energy.  The views were amazing and inspiring! Things also started to warm up a bit. My stomach was getting funky and I was having trouble getting my heartrate down at every incline.  Even when I slowed way down, my heart would go nuts. Altitude! I was running with a runner from Georgia named Lee. Good guy. We visited and kept putting one foot in front of the other. This was his first 50.  Boy, he picked a tough one for his first! I was beginning to feel pretty bad when we hit aid station at mile 21. I was even thinking about dropping this early on. My rationale was that this was a training race for me.  Luckily this aid station was in the middle of nowhere and I had no way to get back to the start/finish from there without walking further. Oh well, on to the next aid station 11 miles away! 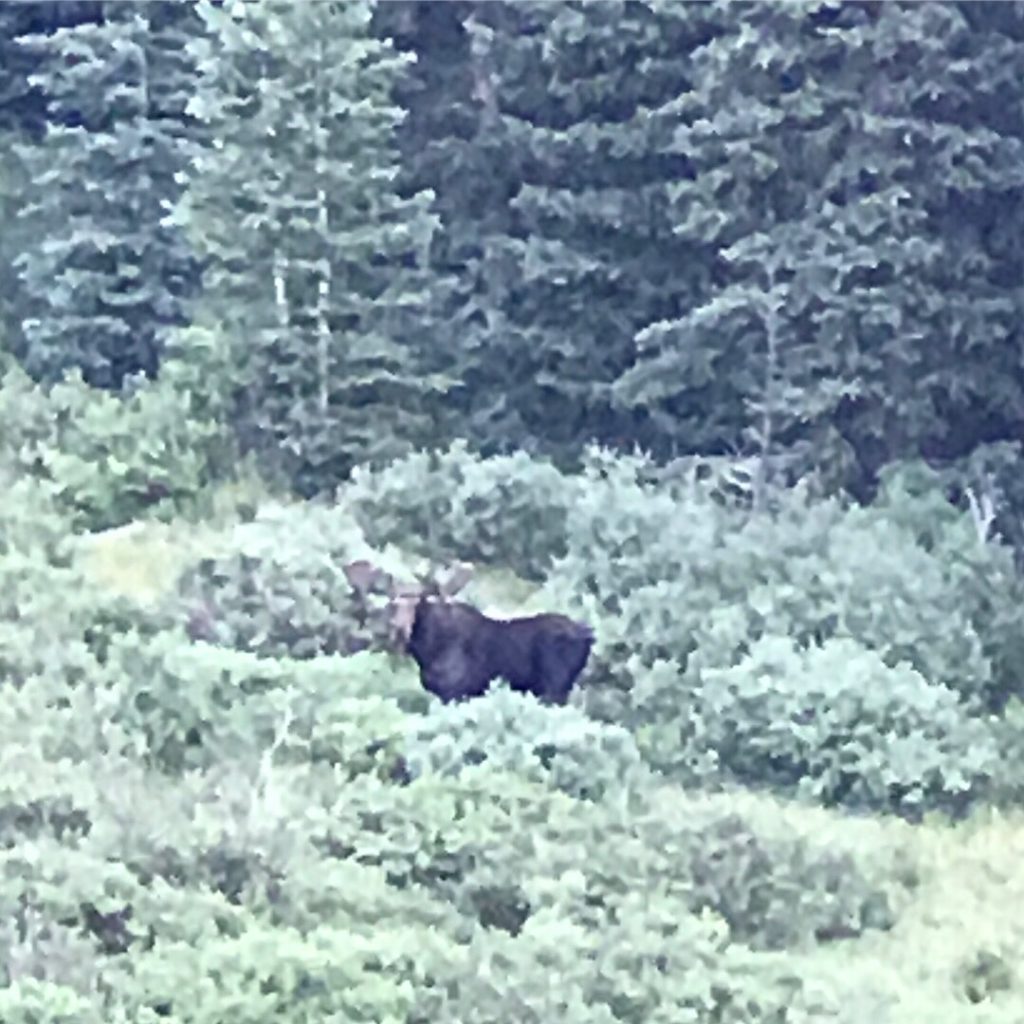 Lee and I plugged on . At one point we came around a corner and saw a huge moose down the trail.  He stared at us as we continued to walk forward and stop. After a couple minutes, he decided to leave.  Thank you! Problem was that he went to the area that the trail would loop to in a mile or so. We kept a look out for him, but didn’t see him again.  Thank Goodness! Eventually we were at the 32 mile aid station. I was hot and calorie deprived and wanted out. I contemplated for a good while. Lee went ahead and took off with my blessing while I sat there contemplating life.  I forced down some liquids and some food and finally decided to head back out. About ½ a mile back into the trail, all of the calories I just ate and drank resurfaced. I walked back down the aid station, and called Jen to let her know that I was dropping.  With my heart rate going nuts, no calories in me, and my extreme fatigue, I was done. She told me that she was proud of me for making a wise decision. This would be my first drop not related to an injury. I let them know at the aid station and found a rock to sit on and have a pity party.  A few minutes later, the RD came by and was checking on a friend of his who was dropping out of the 100 miler. Then he came to me and asked what was up. I told him about my heart rate and that I had puked up my calories. He asked, “Does your stomach feel better now?” I said, “Yeah, kinda.”  He said that I had a long time left and should try to eat again and give it 30 minutes to see if I could keep it down. He brought me a glass of ginger ale to settle my stomach. I ate some chips and started to feel better. A nice guy I had talked to before the race came check on me and invited me to run with him and his crew.  He said, “We are just having fun.” They seemed to be just plugging along and having a good time. I thanked him and told him I needed more time. About 5 minutes later, I refilled my pack and hit the trail. I told the RD and Aid station crew, “Here goes nothing!” John, the RD said, “Awesome! See you at the finish!” I thought, “Jen is gonna kill me.”

About a mile into this next section, I met up with the guys who were just having fun.  I needed their positive energy. We moved slow and steady and joked around….A LOT!  I felt so much better and was enjoying myself again. I knew a fast race was no longer an option, but a finish was.  When I finally had a phone signal, I messaged Jen to let her know I was back on the course. She fussed at me, but I didn’t see the text until later.  We moved steadily and I took a lot of time at the aid stations getting in lots of calories. We eventually made it to the last out part of the final out and back at the Silverheels mine together.  From here, we at 2.5 miles to the last aid station stop and then 9 miles to the finish. I was power hiking the mostly uphill section to the aid station. I was ahead of the group.  At the aid station, I ate some watermelon and got more calories in. The rest of the group caught up. I asked them if they would mind if I just took off. They were fine with it.  I thanked them and headed out. I was in a zone and ready to be done.

Most of the rest of the course was downhill with a few stinky uphill surprises at the end.  I ran most of the final 9 miles only stopping to power hike a few of the steep uphills. I was just ready to finish!  I ran harder as I got closer to the finish. I was on dirt road….the paved road…then the inflatable arch was in site!  I ran it in and was so excited to be done!! Lee was there at the finish and I congratulated him on his first 50 finish. I ate pizza, took a shower and enjoyed the finish line festivities.  Jen encouraged me to pack up my tent and get a room so I could really rest. I obliged. 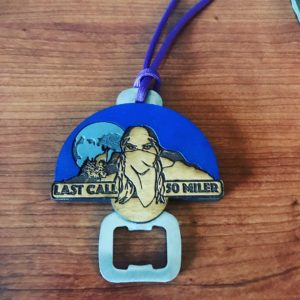 This was my toughest 50 miler to date and my time reflected that:  A 14:30 finish for 12th place. This low-lander will take it.

I went into Leadville the next day and hiked up the 11 mile Black Cloud trail to the top of Mt. Elbert, the highest peak in Colorado at 14,440ft.  A recovery hike?  My knee was a little mad at me afterwards. I spent the night in Leadville and left for home the next day, leaving the mountains behind. I’ll be back though. I need more mountains in my life! 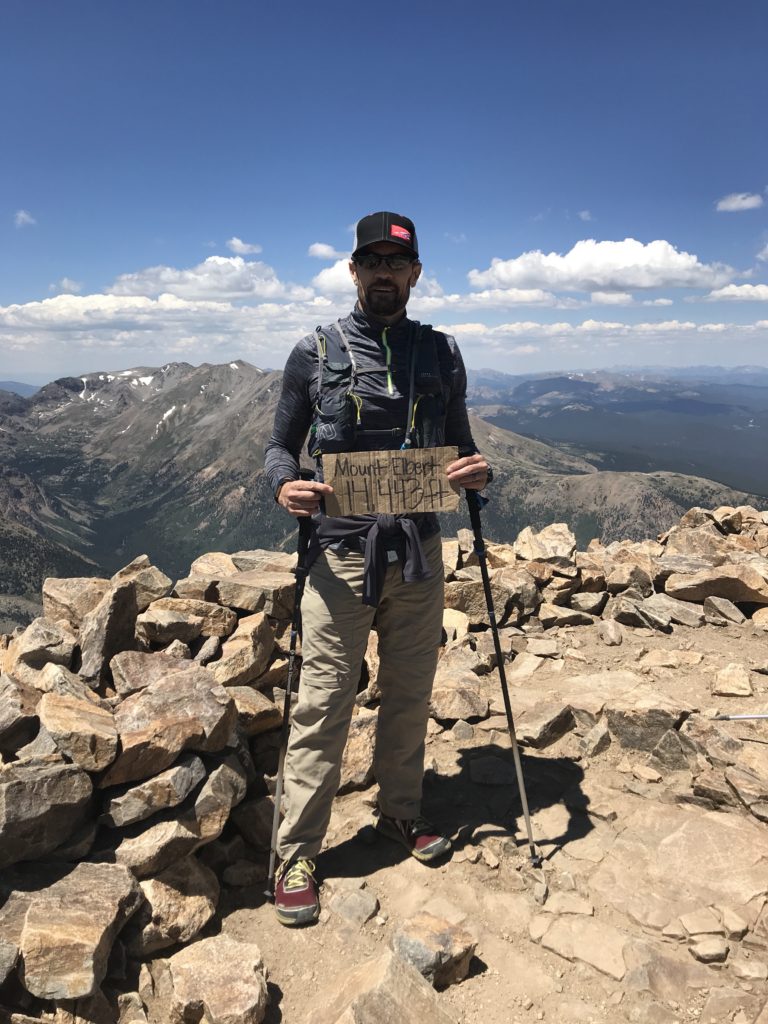 For this race, I wore my new Lone Peak 3.5 shoes with gaiters and they were perfect!  Injinji socks kept my feet happy too.  I kept the same socks and shoes on the whole time.  My new lightweight Altra running shorts kept me chafe free.  Also, I wore my trusty Ultimate Direction FKT vest and it was perfect!

Once again, I’m blessed to be able to do these things.  I thank God for the opportunities I’ve had and that I’ve remained healthy. This adventure was perfect training for Tahoe 200.  It’s getting closer!!  Next stop, Full Moon 50K in Arkansas in 2 weeks!