The Post Oak Challenge is an interesting race on the trails that surround the Post Oak Lodge.  It's a beautiful, scenic place with very nice facilities that are rented out for conferences, retreats, formal dining, and various other events.

The race I would be participating in was part of a three day event, Friday - Sunday.  Runners elect to run one, two, or all three days.  They are called the Post Oak Triple, Double, or Single.  Each of these can also vary as there are various distances to run each day.

The triple could be:

If you decide on The Double, you can pick any 2 of those distances as long as they are on different days.

Because of time constraints and the fact that I'll be running a marathon next weekend, I chose The Single, one distance, the 50K.

Awards are given for single events, age groups for each events, and combined times for Double and Triple.  Lots going on with this event!

The weather here in Oklahoma had been terrible just about all week and Saturday was looking like more of the same.  High 30s - 40s and rainy.  My mindset alternated between "OUCH" and "BRING IT ON!"   It did look like the rain that morning would wait until about 10am to start.  Jen and I left early and she prayed for me on the way there.  We arrived an hour early to do packet pickup and munch on some of the breakfast that was served.  Bacon and eggs for me, thank you!  Jen had signed up for the 25K but had elected to sit this one out.  (An hour into the race, I was kind of wishing I had done the same!)  I met one of my Altra Red Team members for the first time, Clint.  He would be running the 25K as part of his training.  We visited as we both ate our Keto breakfast and talked about diet, Altra shoes, and running.  He'd be wearing the Lone Peaks and I'd be wearing the Timps on these already muddy trails.  Both great choices for these conditions. 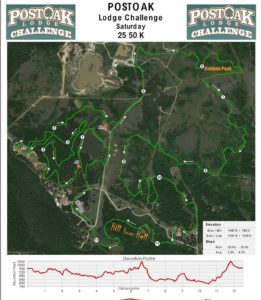 After breakfast, it was time to line up and get going.  I elected to run with my Ultimate Direction FKT pack with a 50 oz bladder so I could just breeze through most of the aid stations.  I almost just grabbed a handheld since it was 4 loops, but I just wanted to run and not rely on anything else.  I had never run on these trails, so I was really excited and nervous as I didn't know what to expect (except mud..I expected that).  There was a notorious "HILL FROM HELL" and "Holmes Peak" that we'd be climbing 4 times each.  "OUCH!"...."Bring it!"  Anyway, we were to follow green flags for the 50K.  The trails were marked super well!  Kudos to whoever was in charge of marking for us!

The first loop was really fun!  The trails were muddy and rocky, but not too bad.  Most of these trails hadn't be traversed yet as the previous day's races had been on other trails. It was cold, foggy, and misty, but really comfortable for trail running.  Five minutes in and my feet were wet, and cold.  I was feeling an issue I had forgotten about in my right foot where my long toe, the second one, was hitting the front of the shoe on downhills.  I meant to stop and tie it differently so it wouldn't do that, but my toes went numb quickly from the cold so I just let it ride.  I would pay for that decision when the feeling came back an hour after the race.  Sorry toenail. 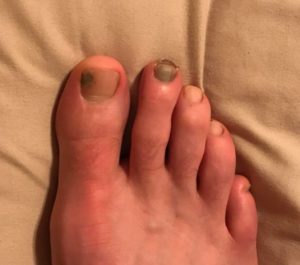 These trails were really fun on that first loop.  I enjoyed myself.  I took an early lead and just had fun doing my thing.  I didn't stop at any of the aid stations on the first loop.  Just before the end of loop 1, coming down the Hill From Hell (aptly named!), I lost control trying to bomb down a muddy downhill and wiped out in the mud.  My right side was covered.  Oh well.  As I neared the Start/Finish it was just starting to drizzle....an hour ahead of schedule.  Thanks, Weather people.   I took off my long sleeve shirt, put on my UD rain jacket, made a quick stop at the port-a-potty and took off for loop 2.

Since the 50k start, a whole bunch of other runners had gotten on the course.  The 25K and 10K were interweaving with our trails now.  It was turning into a mushy mess!  I was still able to keep a decent pace though.  Now, I was having to pass some of the runners of the other races.  They were very courteous and moved aside as I came stomping through the mud.  I would thank them and cruise by.  I realized later...much later... that when I'd go running by that I was sometimes splashing the people I was passing.  Oops!  I'm sorry if I did that to anyone who is reading this!  I think by the 3rd and 4th loops, nobody cared.  Everyone was covered in mud!  With the rain and trail traffic, the 2nd and 3rd loops got progressively messier.  The trails became rivers in come cases where the water was running down.  The creeks ran faster and higher with rushing water.  The mud got deeper and suckier (is that a word?).  Running got tough as you never knew when your foot landed if it would just sink into mud, land halfway on a rock, or land firm on something.  Good thing my feet were numb!

By the last loop, I was ready to be done!  Before I left the S/F on the last loop, one of the race officials came up to me, looked at all the mud on me and jokingly said, "I think you left just a little bit of mud out there on the trail.  See if you can get it on this last loop."  Well, a mile into the last loop, I fell face first into the mud.  It was in the pocket of my pack, on my hat, in my face, my mouth.  Dang it!  Luckily, there was a creek crossing right down the trail.  I jumped in and washed off what I could.  Especially, from my face.  At this point, I hadn't been passed, but didn't know what kind of lead I had, so I just plugged away.  I'd walk most of the muddy uphills and carefully, run the straights and flats.  During the last loop, the rain stopped and the sun came out.  That was nice, but the trails were still trashed.  My quads, also trashed, were beginning to cramp a bit on this loop.  I hadn't been hydrating like I should.  I stopped at a few of the aid stations on the last lap to try and catch up.  I drank some electrolyte drink and water.  I also ate some m&ms, bacon, and tater tots.

After my final climb of the Hill From Hell, I trudged through ankle deep mud that was formerly a nice grassy field, to cross the finish line in 6:03:53 for 1st place.  My slowest 50K to date, but in those conditions, I'LL GLADLY TAKE IT!  Jen and Autumn were waiting for me at the finish.  I love that!  No muddy hugs for them though. 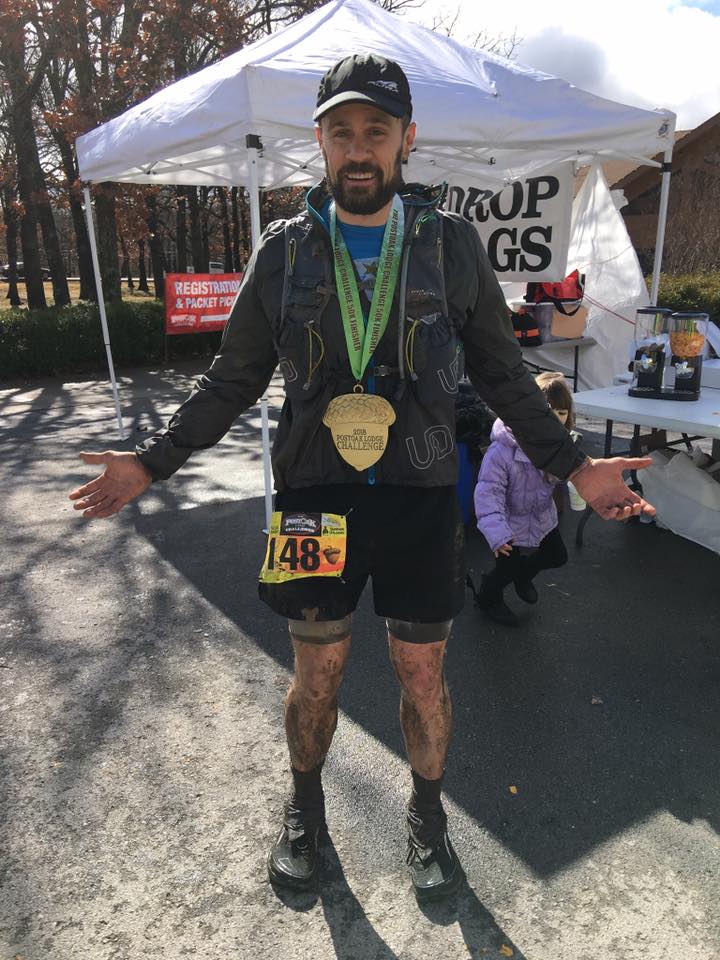 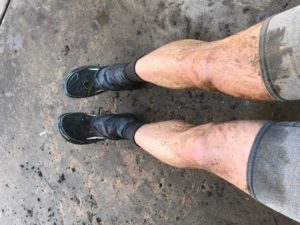 After running this bad boy, I couldn't imagine the people who had run the marathon the day before in similar conditions, did the 50k when I did it, and would come back for another marathon on Sunday!  Kudos to whoever did that!  I'll probably be joining you next year!

Weather and mud aside, I thoroughly enjoyed this race and will plan on being back.  I'd love to experience these trails without all of the weather drama.  Maybe next year!

I'm thankful to be able to go out and run these races.  It's a blessing to be able to train and see the results of hard work.  I also love having my wonderful wife, Jen there with me. 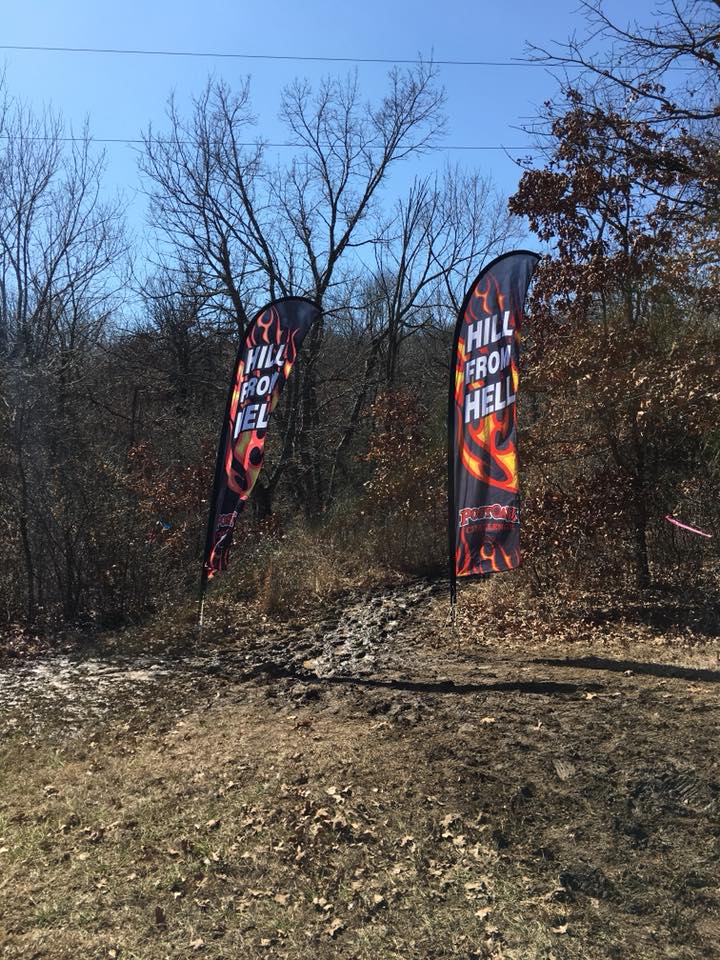 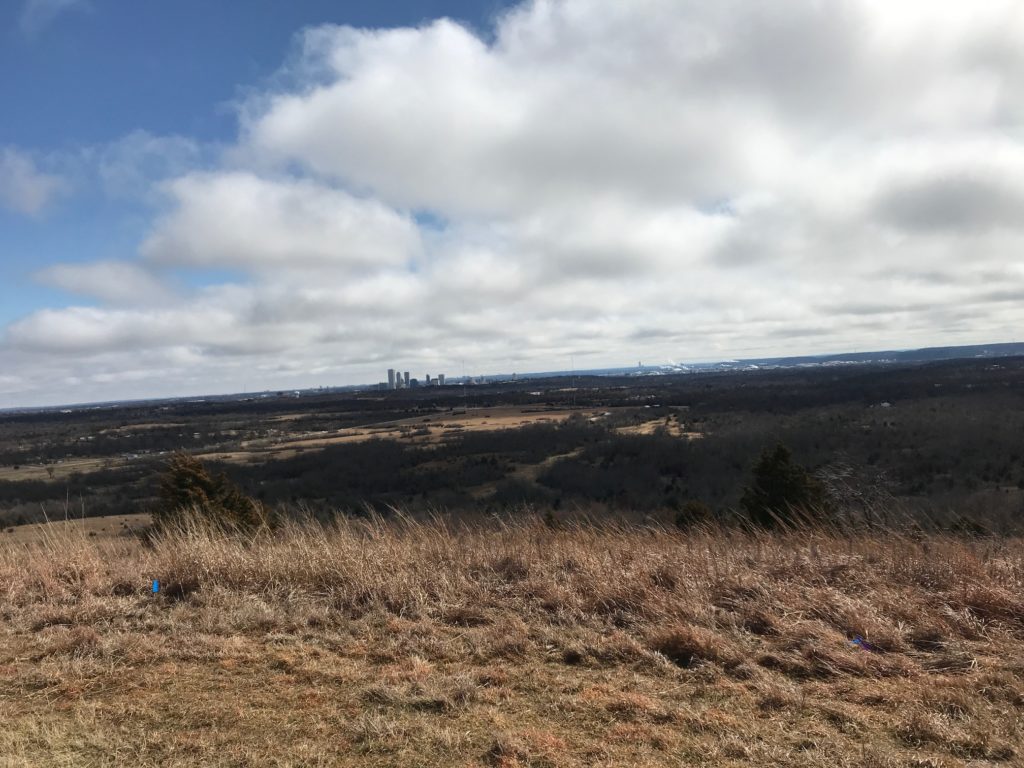